Ratings agency Moody’s has downgraded South Africa’s credit rating to junk or sub-investment status. What does this mean for the country, or more importantly, where do we go from here? 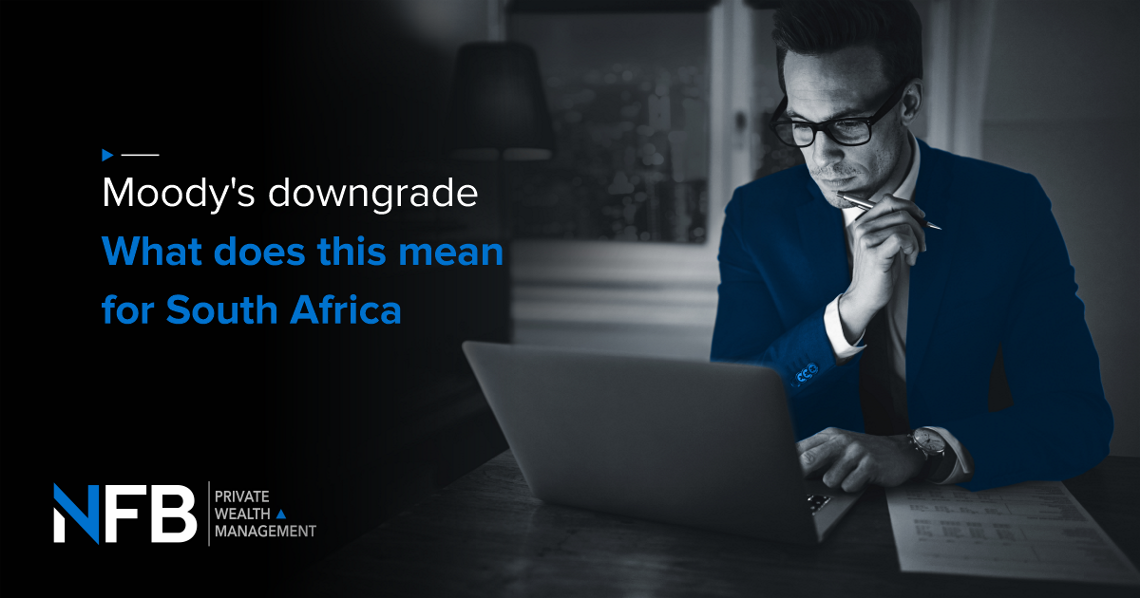 This downgrade had long been on the cards. Both S&P and Fitch, two other major ratings agencies, had downgraded the country’s credit rating to sub-investment grade in 2017 and it surprised many analysts that Moody’s remained an outlier for as long as it did. It was only in late 2019 that Moody’s changed the country’s outlook to negative, indicating that it was preparing to downgrade South Africa unless the country implemented structural reforms which achieved economic growth.

Even prior to this downgrade the market had already anticipated this move and priced it in. Consider the Credit Default Swap market, for example, where spreads on South African government bonds have indicated junk status for some time. In fact, the spread on local government bonds exceeded Brazilian bonds quite significantly despite Brazil being rated as sub-investment grade.

From a ratings perspective the recent Covid-19 crisis has acted as the proverbial nail in the coffin for the country’s economic outlook given that we can expect to see a collapse in growth over the next few quarters.

The immediate impacts of the downgrade are hard to predict at this stage. The recent global sell-off that the markets have experienced – and the associated flight to safety – will make it difficult to understand what impact can be ascribed to a downgrade compared to what is simply the collateral damage of the Covid-19 pandemic-induced economic shock and market reaction we are experiencing.

It’s also difficult to understand – and predict – what will happen to the currency in the short and medium term because of the global dynamics that are currently in play, in particular the appetite for safe haven assets which is a far more powerful force than any of the local issues we are seeing.

One of the known impacts of the downgrade is that with immediate effect South Africa falls out of the World Government Bond Index (WGBI), an index that measures the performance of fixed-rate, local currency, investment-grade sovereign bonds. A widely used benchmark, the WGBI consists of sovereign debt from more than 20 countries. Falling out of this benchmark will result in some index based funds as well as discretionary managers who are limited by their mandate to invest only in investment grade instruments to sell out of South African Government Bonds. Estimations of this sell out varies between $1.5 billion to $8 billion.

However, there is an argument to be made that in a world where yields currently are low – and becoming even lower since central banks started to aggressively cut interest rates in response to the economic shock of Covid-19 – that the search for yield could very well entice investors and funds into the ‘higher quality’ spectrum of sub investment grade instruments; particularly given the recent sell-off in long duration South African bonds. If this is the case, active managers could well look to places like South Africa in search of yield when the market’s risk appetite returns and where the less appealing prospect of close to zero returns on many government bonds for extended periods of time comes to bear.

Bear in mind that since April 2018 South Africa has seen outflows well in excess of $20 billion from local markets. In that context, even a WGBI exit of $2 billion is not that significant. In many respects, foreign investors have been exiting South African assets and the ZAR for some time based on poor local fundamentals.

The big question is where does South Africa go from here?

Of the countries that have recently experienced downgrades Brazil is an interesting case study. The country lost its credit rating in the first quarter of 2016. Its bond yields at that point were around 16%. Fast forward three years and the yield on Brazilian 10-year bonds had fallen to around 6.8% despite the fact that the country is still rated as junk.

How did this happen? Post the downgrade Brazil implemented a number of initiatives to clamp down on rampant corruption, to improve fiscal discipline and reign in deficits. In addition, the country promoted pro-growth and pro-governance policies. With hindsight, the removal of the uncertainty of a pending downgrade may actually have worked in its favour as it gave markets more clarity. After initial outflows, yields indicated an appetite for the reform story being implemented by policy makers.

Portugal and Greece are two other countries that South Africa could look to as examples. Both countries formed part of the much maligned European ‘PIGS’ block made up of Portugal, Italy, Greece and Spain. At the time, the PIGS block garnered significant attention as a result of their weakened economic output and financial instability which heightened doubts about their abilities to pay back bondholders and spurred fears that they would default on their debts. Both Portugal and Greece were downgraded to junk after the Global Financial Crisis. Portugal, however, has fared significantly better in regaining its investment grade credit rating because it quickly implemented a robust reform agenda, despite initial political struggles. Greece did not implement the same reform agenda and instead voted in an anti- austerity populist government that tried to reject the IMF’s reform requirements, which is why it has continued to struggle.

The most rapid example of restoring a country’s investment grade rating is that of South Korea. The country was downgraded in late 1997 and had to go to the International Monetary Fund (IMF) for a $55 billion bailout as the South East Asian market crisis unfolded. Just 18 months later – or, to be more precise, 550 days – South Korea was upgraded back to investment grade rating.

How this was made possible in such a short time frame is once again attributable to a robust reform agenda. In the next two decades – ironically, a shorter time period since South Africa’s transition to democracy – South Korea set about implementing an aggressive process of reform and creating a unified purpose and vision around economic growth. The country has since transformed itself into one of the most sophisticated economies in the world and a country with one of the highest number of PhD’s per capita globally.

We accept, however, that neither Brazil, Portugal or South Korea reformed their economies in the face of a global pandemic that has essentially placed an indefinite hard stop on economic growth of any kind.

What is the way forward for South Africa?

It’s important to remember that credit ratings are simply barometers for investors regarding how well a country is doing financially. The Moody’s downgrade last Friday is therefore no more than a confirmation of what we already know, which is that the local economy is not functioning optimally.

Key going forward will be the ability of President Ramaphosa’s government to act with political unity to reform South Africa’s economy. On the upside, the 2020 budget addressed many of the challenges that need to be resolved including reducing expenditure, reducing the tax burden on the country’s citizenry and business, and more room for the private sector to be involved in aspects of the economy that have to date been the sole preserve of state owned enterprises. A further positive is the president’s focus on institutional regeneration at the South African Revenue Service, the Hawks and the National Prosecuting Authority.

The bad news is that the economic shock posed by the Covid-19 pandemic will make any recovery difficult given that South Africa did not go into this latest crisis from a position of economic strength.

Ultimately, it will be the level of intent and efficacy with which government approaches any reform initiatives, and how vigorously they are pursued that will determine whether a credit rating is something that our economy will overcome, or whether it is indicative of a longer term slide that ends up with the country at the door of the IMF, begging bowl in hand.

However, even the IMF won’t be an option unless South Africa is prepared to implement a reform agenda. The conditions of an IMF bailout revolve around eight principles. These include fiscal policy discipline, tax reform, trade liberalisation, the privatisation of state owned enterprises, the liberalisation of foreign direct investment, security of property rights, and deregulation.

All we can hope for is that South Africa’s government does what needs to be done without a proverbial gun to the economy’s head.