Further interest rate cuts are in the offing as SA's inflation outlook gets a boost from lower oil prices and subdued consumer demand.

South Africa entered the Covid-19 crisis in a precarious fiscal position. The recent lockdown has served to further exacerbate the country’s vulnerable economic situation. It raises the question of what the impact of recent events will be on inflation?

Even prior to this crisis the country’s economic growth was lacklustre at best. Despite a weakening rand against the dollar and rising oil prices over the last couple of years, there has been little inflationary pressure. This was primarily the result of a lack of demand caused by low economic growth and high unemployment. There were, however, other issues weighing down on the economy too.

On the government-spending side of the economy, the fiscus must deal with two other challenges. There is the ballooning public sector wage bill and ongoing bailouts of struggling state-owned enterprises. Nevertheless, the markets were encouraged earlier this year when finance minister Tito Mboweni raised the contentious issue of the public sector wage bill in his budget speech. As the coronavirus pandemic engulfs SA, hopes are high that the crisis will provide the government with the impetus to finally implement a meaningful economic reform agenda.

Some of the positive signs include switching off the financial taps for South African Airways (SAA). Those with qualms about the airline closing won’t be as loud as previously. The broader economic crisis that the country is currently engulfed in will likely disarm arguments around additional bailouts being considered for SAA and could – in some respects – be seen as a way in which government can push through the political issues associated with making this very necessary decision.

That brings us to the other pressing issue. The public sector wage bill makes up around 18% of SA’s GDP. While the government has previously stated its intention of addressing it, the reality is that the government has found it exceedingly difficult to actually implement this strategy due to backlash from trade unions. While it does appear that the government is starting to address this, it will need to walk a fine line in terms of the approach to addressing the wage bill and the impact these public servants have on the economy from a consumption perspective.

Moving on to the supply side of the economy, the impact of low oil prices on inflation expectations needs to be gauged. The collapse of the oil price earlier this year was swift and unexpected. Even factoring in the depreciation of the rand, Brent crude oil is down by some 60% and will undoubtedly impact inflation locally. Despite the recent agreement between members of the Organization of Petroleum Export Countries (Opec) to remove around 10m barrels of supply from the market daily, this won’t be enough to significantly prop up oil prices in the short term.

There are two reasons for this: Firstly, the reduction in demand for oil due to the shutdown of the global economy ranges from around 20m to 25m barrels per day – which is still far in excess of the cut. Secondly, even with this decreased production, the world is running out of storage capacity, so even further cuts will be offset by inventory supply. The practical issue of storage was highlighted when April futures expired on 20 April and surprisingly, West Texas Intermediate (WTI) fell to -$40 per barrel for a short while.

The oil price slump will necessarily affect SA. Transport makes up around 15% of the consumer price index (CPI) directly and impacts a further 30% indirectly through food and beverages, clothing and household content. Ultimately, while the oil price is certainly a factor locally, it’s not the only factor. A significant offset to the lower fuel price will be the impact of Eskom. While the Covid-19 crisis has allowed the energy crisis to slip off the radar for a short time, it’s an issue that will soon return to haunt us.

For oil to have a meaningful impact on SA’s structural inflation dynamics, the price would need to stay low for an extended period. This is only likely to happen if global demand remains low on the back of exceptionally low levels of economic activity. While the IMF has indicated expectations of global economic contraction of 3% for 2020, it does expect growth of some 6% to 7% in 2021.

An early indicator that oil prices won’t remain low in the medium term is the fact that one-year oil futures are currently trading at a premium of more than 50% to the current oil price. It does, however, appear unlikely that the local economy will face headwinds from the oil price in the foreseeable future.

Thus, we expect that the demand and consumption element of inflation is likely to be benign for the foreseeable future for several reasons. The post Covid-19 world will present the economy with a host of uncertainties. These uncertainties will not only be focused on job security and business sustainability, but also more generally around how the world will work after the pandemic. There is a significant risk that individuals and businesses will be conservative in their approach to spending and will defer non-essential activity while they adopt a wait-and-see approach.

Even lower interest rates for excess funds sitting in cash and for borrowing money may not be a big enough incentive to entice businesses to spend and raise capital investment – at least initially – and consequently, pricing power may well be a casualty. This once again is likely to keep inflation at bay in the short term.

When we look at consumer spending, on the other hand, the local reality doesn’t inspire confidence either. From a stimulus and recovery perspective, the ‘helicopter money’ (cash payments to individuals that aim to support consumption) element of stimulus packages utilised in countries such as the US, Japan and Australia is simply not a realistic tool for SA given its weak fiscal position, and consequently, ‘artificial’ demand will not be a factor in the inflation equation.

Given the expected subdued business investment and consumer spending outlook, how will future interest rate decisions and investment decisions by retail investors be impacted? In the very short term, it’s likely that inflation trends lower and tests – and possibly, even breaches – the lower limit of the inflation target band (3%).

As for the vulnerable state of the economy and the limited fiscal tools available to the government, it is likely that monetary policy will be used as a mechanism to support the economy, with further rate cuts in the next few months.

That’s not to say that inflation won’t trend upwards as economic growth returns to the world, but for the time being, inflationary pressure is not something the Reserve Bank will need to contend with.

Bear in mind that around 2013, the bank was willing to run negative real interest rates (interest rates were below inflation). If an inflation assumption of 3% to 3.5% over the next year is accurate, the Reserve Bank has scope to cut interest rates further, and given the nature and severity of the crisis that we face, it is highly likely that they will do this. 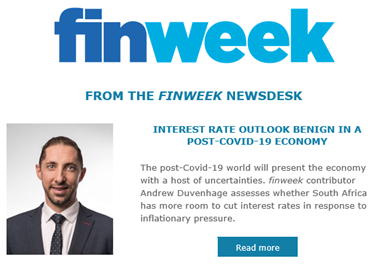 This article was written exclusively  for finweek’s  24 April newsletter.
You can subscribe to the newsletter here: bit.ly/finweeknews

Settling debt versus investing: What are my options?

Structured products: what are they, and what do they do?

To RA or not to RA

How much capital will I need to retire comfortably?

How businesses can better prepare for the loss of key personal