The seventh in a series of weekly lockdown-inspired market commentaries; this one including an update on trading and performance from NFB Asset Management.

With Germany considering a return to lockdown, the United Kingdom extending theirs to the 1st of June (and potentially implementing a two-week compulsory quarantine for all arrivals from outside the UK), the world exceeding 4 million confirmed positive cases with approaching 300,000 deaths and South Africa attaining the targeted level of 10,000 tests a day; we are all still very much in the thick of this.

For those who prefer to watch content rather than read it, NFB Asset Management together with Analytics Consulting have prepared two videos with STANLIB’s Chief Economist Kevin Lings. The first on coronavirus itself and the second an economic update on the consequences of coronavirus-related lockdowns. The first can be viewed here (8 minutes) and the second can be viewed here (18 minutes).

During April, the NFB AM Investment Committee elected to increase exposure for the Stable and Managed Funds to South African bonds (both nominal and inflation-linked, across government; parastatals and corporates) by switching half of the respective Funds’ exposure from the Investec Diversified Income Fund to the Investec Gilt Fund.

On average, flexible income funds (of which the Investec Diversified Income Fund is one of three currently used by the above funds) have forward yields of 8.5% and duration of 1 to 1.5. Duration is a measure of interest rate risk, the higher the number the greater the potential capital loss when interest rates rise. Bond funds (the Investec Gilt Fund is the one we elected to switch to out of three we considered), have yields of roughly 11% and duration of 6.5. Given that neither inflation rates nor interest rates are likely to rise substantially or rapidly from here, the relative risk was one we thought worth taking. BNP Paribas forecast just last week that inflation for 2020 is likely to average 2.8%; i.e. below the lower-bound of the inflation target of 3-6%.

Performance data to the end of April is now available. All of our Funds, as expected, performed well during April. Medium-term returns are, however, low but in line with the relevant peers/sectors. Longer-term data, five years or more, is more than acceptable. Except for the NFB Global Balanced Fund, managed out of Mauritius by NFB AM International, where global property exposure has resulted in sub-peer performance; though only by a percent or so. The global property exposure was reduced in December last year from 15% to 10% but it would have been preferable for that Committee to have reduced it even more than that.

On Monday, the National Association Of Automobile Manufacturers released sales data for April 2020. Vehicle sales were down 98.4%(!) from the previous month. Sales are around 30% lower than they were a year ago. The automobile industry accounts for nearly 7% of South African GDP. Also released last week were the ABSA and Standard Bank PMI Indices data; the latter of which is more relevant as it’s for April whereas the former is for March. Surprising no one, the Standard Bank data was at its all-time low and has been in contractionary territory for 12 consecutive months now. Then on Thursday last week, the SACCI released its business confidence data which is at its lowest point since the index was first published in 1985. All rather grim if not unexpected reading.

With the upcoming meeting of the South African Reserve Bank’s Monetary Policy Committee this month, naturally the market is naturally enough speculating about the possibility of an interest rate cut. The Repurchase Rate is at its lowest point since 1973. The BNP report alluded to earlier also includes a forecast of a further 1.25% in interest rate cuts which would hand South Africa the lowest central bank rates out of the selection of emerging markets below (the full weekly chart book can be found here). One does wonder what this means for the carry trade and hence the rand. The most likely outcome from the SARB this month is a 50 basis point cut, with the balance held in reserve as a counterweight to economic data to come later this year that is very likely to indicate an economic contraction in the order of 10-15%. 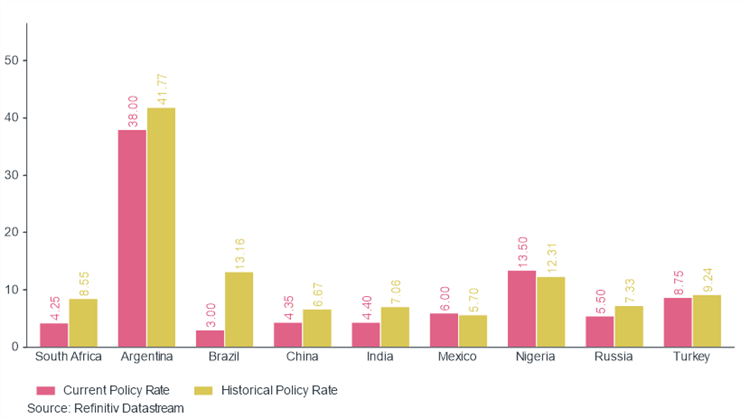 In addition to weekly initial jobless claims data, last week we got official US unemployment data. The unemployment rate is now at 14.7%, with almost the same number of jobs created in the decade plus since the Global Financial Crisis having been lost in the last two months. One anticipates that much of these however are related to the gig economy and that as soon as shelter in place orders are lifted that these will return. Speaking of gig work; Citywire published a worthwhile article on the performance of tech shares during the crisis which you can find here.