The ninth in a series of weekly lockdown-inspired market commentaries; the last, hopefully, during level four.

Clearly last night’s Presidential address will be today’s main topic of conversation. The economy will most definitely welcome the move to Level 3 on the first of June but as with previous lockdown levels there is rather a lot of detail to chew through. Our business will be spending some time this week preparing our response to Level 3; please be on the lookout for further communication in this regard.

The United States’ 100,000th COVID-19 death is likely to occur some time in the next day or two, which will provide market commentators with a talking point all of their own. As too will the rapid escalation in the number of confirmed positive cases to more than 365,000 in Brazil (doubling in the last week alone), prompting a travel ban from that country to the US by President Trump over the weekend. In addition, Hertz’s bankruptcy filing from late last week is arguably the most obvious direct economic consequence of coronavirus thus far. It’s tremendously unfortunate but this is likely to be only one of many to come.

Last week Thursday the Monetary Policy Committee (MPC) of the South African Reserve Bank (SARB) cut interest rates by 0.50% (the publicly available statement for which can be found here). The market had been expecting a larger cut so the rand strengthened against the US dollar on the day as a smaller than expected cut means South African rates remain somewhat more attractive than expected for a while longer relative to their developed market counterparts. Note though that two Members of the Committee did want a smaller cut of 0.25% which is indicative of a slowing in rate cuts in our view. Total interest rate cuts for 2020 now amount to 2.75% with further cuts of between 0.50% and 0.75% widely expected at the next Meeting on the 23rd of July. The repurchase rate is now at 3.75%; not too far off a 50-year low. Should further cuts not occur then expectations are for rates to return to a more normalized level more slowly than they otherwise would have. Amy Degenhardt from NFB Asset Management wrote a blog article on this topic which can be found here. We’ve plotted the South Africa repurchase rate below and you can find more charts in our regular weekly chart book here. 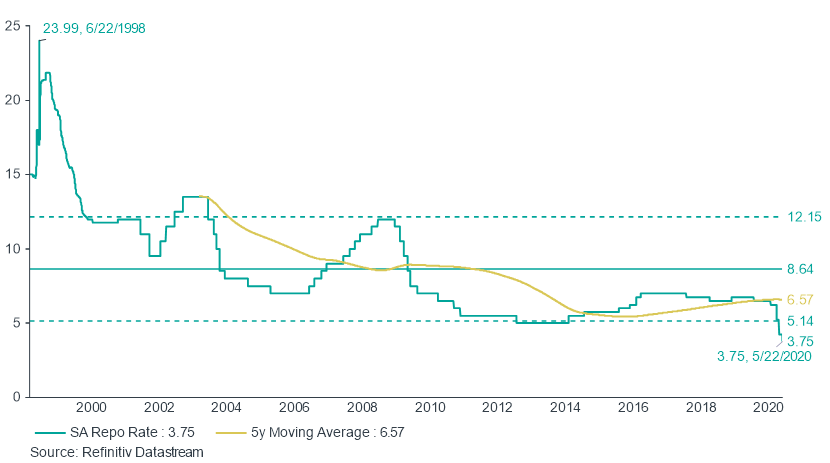 Following Thursday’s South Africa MPC meeting/announcement, was the reaffirmation by S&P Ratings Agency of South Africa’s foreign and local currency ratings and its stable outlook. In Ninety One’s weekly email last week Monday they noted that there have been 102 emerging market ratings and outlook downgrades on 64 countries since the 4th of March this year. South Africa is most definitely not alone in this universe. Justin Boyce from NFB Asset Management is preparing a blog post on this topic which is due for publication this week. We’ll provide a link to it in next week’s edition of this email.

Ordinarily, we focus our commentary here on South African, US and some European markets but the Bank of Japan (BOJ) emergency MPC meeting on Friday was fascinating. They’ve committed to keeping their central interest rate at -0.10%; which has been the case for ages now. More interestingly, they’re buying Japanese government bonds outright so that the yield on the 10-year remains at 0.00%. Again, this has been known for some time. However, if that wasn’t thought-provoking enough, never mind market influencing, they’re also buying Exchange Traded Funds and Japanese Real Estate Investment Trusts so that the amount outstanding (i.e. owing to the BOJ) remains at 12 trillion and 180 billion yen respectively. We do though lack some context here: is 12 trillion significant relative to the size of the economy, the overall outstanding amount and/or the average daily volume? This is, regardless, the stuff of financial history books; the simple presence of a buying program likely being enough to materially influence markets; especially given the multi-pronged approach being adopted. You can read the Bank’s Statement of Monetary Policy here, it’s dry but it’s short and written in plain language.

A quick word on technicalities: central banks’ statements often include commentary on expectations for GDP growth (the SARB revised theirs down to -7.00% for 2020 from -6.10% previously and Coronation’s expectation of global GDP contraction for 2020 is 3.00% from a Fixed Interest and Listed Property update held last week). The SARB’s estimate appears low if you’d been hearing of an expected contraction in the order of 10-15%. As with most financial data, there are any number of ways to calculate things. Given the meaningful rates of change in GDP at present, the manner of calculation actually matters right now. The convention is to compare this quarter’s level of GDP to the previous quarter’s and multiply that by four to gross up to a year. Seasonal adjustments for things like heavier consumer spending in December are an ordinary part of this process. So the expectation of a 10-15% contraction is really for the June quarter-end to be 3-4% lower than the March quarter-end. Bear this in mind when reviewing a statement like the one from the Reserve Bank which is about 2020’s GDP level relative to 2019’s, not about June versus March. Academics and technocrats rejoice! For further reading, have a look at this infographic from Visual Capitalist on how central banks around the world have responded to COVID-19.

Less exciting, is the dire state Statistics South Africa finds itself in, having essentially run out of government funds to support their critical work. The most obvious example has been the conversation surrounding the next census but more alarmingly is the fact that their precarious financial situation has led to the agency delaying the release of inflation data for April to the 24th of June. Essentially now running a month in arrears. One wonders what this means for all the contractual material (e.g. retail escalations and inflation rates embedded in inflation-linked bonds) that is linked to this.