The third in a bi-weekly series of lockdown-inspired market commentaries; this one covering interest rates, gold and trade wars. 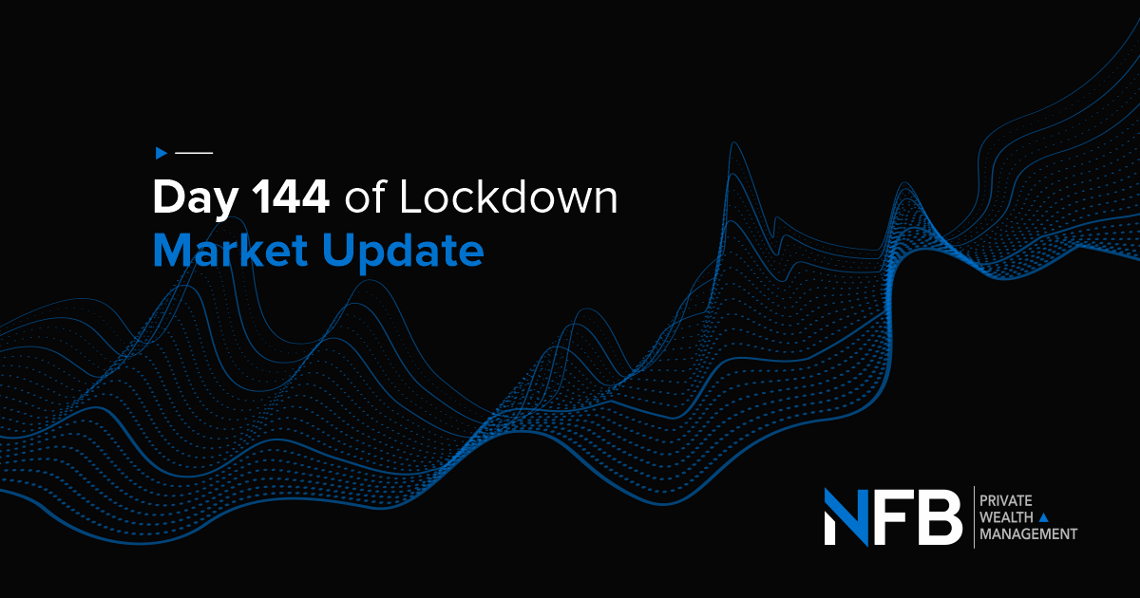 Welcome to the final edition of NFB’s weekly, and subsequently bi-weekly, series of lockdown-inspired market commentaries begun just as the original 21-day lockdown started and continuing through fifteen editions. With President Cyril Ramaphosa’s speech on Saturday evening including a sensible though relatively short extension of the national State of Emergency from the 15th of August to the 15th of September, with the speech lowering the alert level status from 3 to 2 and, arguably more importantly but much less discussed, with South Africa’s active case count continuing to fall and which will soon be below 100,000 for the first time in many weeks, we felt now was the time to complete this series of publications. NFB Private Wealth Management and NFB Asset Management will return to their regular reporting schedules in the first week of September. Both businesses’ blog pages can be found here if you’re looking for further reading material.

Whilst this publication is reaching its end, coronavirus very much remains with us and is likely to remain so for the foreseeable future through second-, third- and beyond peaks. More critically, through second- and third-order effects as well. After 102 consecutive days absent a positive coronavirus result, New Zealand has had to return some of their cities to a state of lockdown, though to be fair about half of the newly identified cases were imported. The case count in Germany has also started to rise and the United States continues to battle along, now with more than 5.5 million confirmed positive cases and nearly 175,000 deaths. Their active case count is very nearly 2.5 million. There is also a fascinating business school study in leadership just waiting to be written: a Prime Minister who carried and gave birth to a child, dealt with a live-streamed terrorist attack, a natural disaster and a global pandemic and a President who appears to willfully create content for people close to him to write memoirs about…

From a market perspective: big tech remains very much in the headlines with the “anti-trust” (i.e. monopoly) testimony before congress from Google, Facebook, Amazon and Apple turning out to be largely a non-event; essentially being a platform from which Senators could reassure their constituencies that something was being done more than anything else. Especially important going into November’s election cycle. With big tech now constituting almost half of the S&P 500 and more than 100% of all the equity market recovery seen since mid- to late-April, will the story of 2020 be one of how inevitable progress toward a more interconnected, more geographically-dispersed future was accelerated or will it be tech-bust 2001/02 version 2.0?

Whilst tech will have far reaching implications, into our personal lives; the way we conduct our businesses and deep into the future, humankind, particularly generations that follow our own, is likely to be a net beneficiary; though gig workers and phishing victims may not feel quite that way. It isn’t a given though that our children and their children and the children that follow will be net beneficiaries of all the central bank and national treasury debt that has been taken on to save our generation from the ravages of coronavirus; particularly economic ones. Interest rates are low now, debts are not yet due. But rates will rise, the debt will have to be repaid and those costs will be deducted either from whatever economic growth we are able to generate in future or from the value of our currencies through higher rates of inflation; though we acknowledge that is a relative position: i.e. that those with higher rates of inflation than others will depreciate more. Most likely from some form of stagflation: low growth with higher inflation, traditionally combined with elevated levels of unemployment. Though this publication is at an end, it is highly likely that future publications from various parts of our business are going to be writing about this for years to come.

The way that conversation currently expresses itself is through a very steep yield curve. The South African Reserve Bank has cut interest rates heavily this year (and may have one more cut of 25 basis points to go) which has taken short-term cash deposit rates to somewhere between 2.5% and 3%. Longer-term rates on South African government bonds, though, remain elevated as concerns regarding fiscal sustainability have not only persisted beyond sub-investment grade downgrades which seem such a prosaic part of the recent past but have actually become more pronounced. The yield on the South African 10-year nominal bond was just under 9.2% at the time of this writing. A yield that is very nearly triple the current inflation rate and likely to be a good 3% higher than the inflation rate that will be present over the lifetime of the bond. Another manner in which this conversation appears to be expressing itself is through the currency. After having sold off to nearly 19 to the US dollar the rand staged a meaningful comeback, rallying to low 16’s but since then has traded back into the mid-17’s; we suspect largely on the back of Turkey’s failed attempt to defend its own currency which took on fairly ordinary norms like spending US dollar reserves to buy Turkish lira and than decidedly non-normal characteristics when the central bank deliberately made their interbank market less liquid in an attempt to slowdown the speed of the currency’s depreciation. Both forms of intervention, conventional and unconventional, have failed so it’s not terribly surprising then that international markets are looking to the rand and placing a lower value on it.