Our Private Wealth Managers unpack the detail of the 2022 Budget Speech and its implications for you.

Finance minister Enoch Godongwana delivered his maiden Budget Speech earlier today. The focus was on how the government planned to stimulate sustainable growth in an economy still feeling the effects of the COVID-19 pandemic.

Improved tax revenue collections throughout 2021 painted a rosier picture regarding South Africa’s fiscal position. Godongwana, however, faced the tough task of balancing the needs of the economy and appeasing a nation that has become increasingly reliant on state funding.

As always, taxes, debt service costs, and the precarious position of state-owned enterprises were key on the agenda. The reminder, too, that only through sustained economic growth, driven primarily through infrastructure investment, can South Africa expect to see a decrease in poverty and increase in employment had a bold mention.

How does this year’s budget affect you?

Tax revenue strengthened significantly in recent months and is expected to reach R1.55 trillion for 2021/2022. This is well above projections. However, the sustainability of this surplus has been questioned as commodity prices begin to cool. South Africa is a commodity-intensive country and the spike in prices globally has aided our exports and resulted in a trade surplus, boosting corporate and income tax collections.

On top of everyone’s budget wish list was no material increases in tax. South Africans can breathe a collective sigh of relief here as value-added tax, taxes applicable to trusts, donations, death, and transfer duties remained at current levels. Furthermore, provision were made to reduce capital gains tax for companies from 22.4% to 21.6%.

Increases were strictly reserved for excise duties on alcohol and cigarettes. 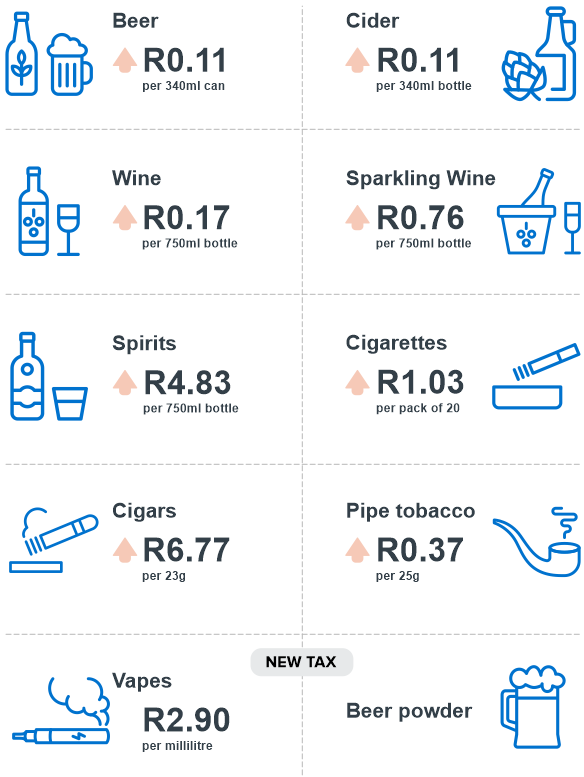 Overall, despite the increases in tax on alcohol and tobacco products, we are of the opinion that these tax adjustments show that government understands some of the pressure that the average South African has been under given general inflationary conditions in our country. There seems to be acknowledgement that South Africa has reached the point of diminishing returns when it comes to tax rates. In our view, the general public should be satisfied with this part of the budget.

Much has been said regarding South Africa’s debt position, and stabilising runaway debt has to be one of government’s main priorities in the medium to long-term. A year ago, at the last budget speech, it was predicted that debt to GDP was expected to stabilise at 88.9% of GDP in 2025/2026. However, estimates now suggest that gross loan debt to GDP will stabilise at 75.1% of GDP by 2024/2025. It must be noted that this change is in large part due to a reestimation of the size of the economy as opposed to a materially different projected debt trajectory.

Although not out of the woods yet by any means, the debt position does appear to have stabilized somewhat. This is mainly due to increased revenue collection and better-than-expected economic activity in the last half of 2021. However, as stated previously, the sustainability of this revenue windfall is questionable at best and government needs to focus on economic growth and job creation if it is truly going to get the debt situation under control.

Minister Godongwana made reference to sustained economic growth and the importance of this in terms of creating jobs. The Minister also referred to infrastructure investment and how this will be accelerated. Infrastructure is a labour-intensive industry. This results in increased employment as well as more efficient operations which can only aid the economy. Furthermore, Minister Godongwana has painted a positive picture of private/public partnerships with regards to infrastructure development. This will essentially comprise of a direct interface with private financial institutions for investments in critical government infrastructure programmes. Looking at figures, specifically, a provisional allocation in the Budget of R17.5 billion has been set aside for the MTEF for infrastructure catalytic projects. While it is positive that economic growth is a priority, these themes, issues and proposals have been raised in many previous budget speeches. We have yet to see meaningful execution, implementation and results.

Overall, the budget speech was in line with what was expected. However, there were a few (good) surprises thrown in. The upward adjustment in personal income taxes was a welcome relief to support an economy that is under pressure. Furthermore, motorists were given some respite over rising costs due to no increase in either the fuel levy or Road Accident Fund contributions (in fairness though, a huge component of the price of fuel goes to government coffers already). Companies were also provided with some relief as provisions were made for both income tax and capital gains tax reductions. Excise duties on alcohol and tobacco were increased between 4.5%-6.5%, but this came as no surprise. There was light mention of the public sector wage freeze. Perhaps not enough was said in this regard, given its sizable impact on fiscal expenditure.

Furthermore, the speech was light on commentary regarding state-owned enterprises (SOEs). Whilst mention was made regarding the ‘shifting away’ from the trend of bailing out SOEs, no real commentary of substance was made. Regarding economic growth, the Minister made the right noises - partnering with the private sector in terms of infrastructure development and job creation. This is an essential part of trying to reinvigorate growth within South Africa.

The optimists will say this was an extremely positive budget speech, providing relief to taxpayers and focusing on reduced expenditure and job creation. The pessimists, however, will point to the fact that we have seen this movie before, and government action has been far too slow time and time again. They will also note that much of the budget is based on the assumption that government can and will hold the line on expenditure, despite evidence in the past that it has bowed to political pressure and capitulated on these issues in the past. In the end, it is action, not words, that will strengthen our economic outlook.


The numbers in pictures 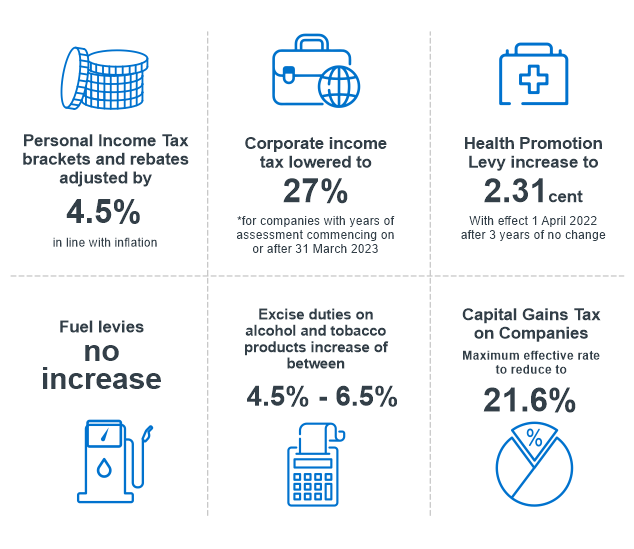