From lockdowns to crypto, regulators are going to have to perform quite a balancing act.

The race for a vaccine

No outlook for 2021, and beyond, is complete without including Covid-19. This year will be more about the vaccines deployed against the disease than the disease itself. South Africa plans to vaccinate its healthcare workers by the end of February, a noble and well-placed goal, and 20 million South Africans by the end of the year.

Arguably, this latter goal is ambitious from a logistical point of view. There are also likely to be difficulties acquiring and even financing suitable quantities of the vaccine.

For context, the Philippines has a population of 100 million people. It plans to vaccinate 100% of its population – but only by 2023. Cause for optimism is that at least five major vaccines are available to the world: the three major ‘Western’ vaccines and one each in Russia and China, together with a number of others in various stages of global development. What this means is that ultimately, there will be many channels from which to acquire a vaccine.

The key trend for 2021 then is for extended periods of variations on lockdown to buy time with which to achieve herd immunity. The lighter the lockdown and the sooner immunity is achieved the less economic damage. On the other hand, the longer this takes the more likely the economic damage is to be of the kind that cannot be recovered from.

From an Organisation for Economic Co-operation and Development (OECD) perspective, inflation has been a non-issue for the better part of the 2000’s but even more so since the global financial crisis. This has been true for South Africa as well given that inflation has been within the target range since 2010.

For large, developed market economies, inflation peaked between 12 and 16 percent in the 1970’s, mostly as a result of the OPEC oil supply crisis, and has been trending downwards ever since. With massive monetary and fiscal stimulus directed at supporting economies and their people during Covid-19, countries’ balance sheets have never expanded more rapidly. At some point this must be inflationary.

It wasn’t, however, in the period post the massive stimulus associated with the global financial crisis. So why should it be any different now? There are three factors at play: firstly, the demographic benefit of population growth driving down marginal labour costs is abating; secondly, the deflationary impact of technology is also abating (a trend which is being accelerated by the regulatory aspect); and thirdly, a move toward localisation away from globalisation which also removes some of the pricing advantages enjoyed by the world economy for the last 40 years.

Combine this with supply bottlenecks as a result of logistics channels being coronavirus constrained and the elements are there for the re-emergence of inflation.

No one particularly likes regulation, until things go awry. We expect to see much more regulation in 2021. As an example, South Africa’s Protection of Personal Information Act (POPIA) goes into full force on the 30th of June this year.

The European Union is likely to continue to evolve their stance on GDPR which inevitably affects the big tech companies that have been such darlings of the markets for the last few years and which are now subject to greater and greater levels of distrust and anti-trust lawsuits.

One of the most jarring confluence of regulators, tech companies and users in recent months has been the way US President Donald Trump has very effectively used platforms like Twitter to get his particular message out to market. In response to the recent violence which took place at the US Capitol, a number of platforms, including Twitter, banned the president from their platforms, inevitably sailing very close to being the arbiters of free speech and justice; behaviour which is arguably well outside their purview.

There is no question that tech companies are playing a growing role in censorship – and even shaping news flow – which is become increasingly problematic.

Expect to see more regulation in the months ahead, including more aggressive tactics out of China where business entrepreneurs like Jack Ma of Alibaba have been almost entirely derailed through the failed listing of Ant Group. This is culminating in speculation that entities that become overly large are increasingly subject to the risk of nationalisation.

One area in which we see a more liberal market approach from regulators is in the crypto or digital assets space. Our own regulator, the Financial Sector Conduct Authority (FSCA), took a very smart path in deciding to regulate crypto assets rather than just crypto currencies. This essentially future-proofs the South African regulatory environment from what is very likely to be rapid evolution in this space.

That bitcoin has rallied so significantly over the last year - even if that does come with extreme levels of volatility - only serves to reinforce what we think is likely to be a key trend for 2021: more and more mainstream acceptance of digital assets, primarily blockchain-based and in spaces we perhaps didn’t see coming: digital mortgage contracts anyone?

ESG (environmental, social and governance) investing has been a theme for a long time now. There was, rightly or wrongly, however always a need to demonstrate that investing on such a basis doesn’t come at additional cost to investors in the form of actual higher management costs, or in the form of lower returns and/or higher volatility. We anticipate that investors are willing to tolerate these higher costs (even if they are simply perceived and not actually evidenced) in order to ‘do the right thing’. We also anticipate a greater focus on the S element of ESG. Environmental and governance concerns were both much more prevalent historically but the role of mega social media-led tech companies has brought the social aspects of investing into greater focus. 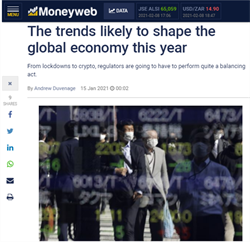